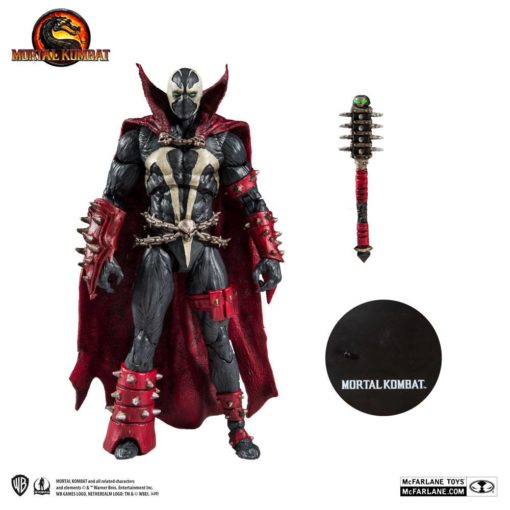 This Spawn Action Figure is sure to be one of the hottest figures this year!

Back in 1994 Todd McFarlane formed his own toy company; McFarlane Toys. His toy company is now known for producing high quality figures from some of the biggest licenses around. McFarlane Toys Spawn figures are some of the most popular toys on the market. This figure is surely going to be one you don’t want to miss.

After appearing as a DLC character in the popular video game Mortal Kombat 11 comes this highly detailed action figure which comes with a savage weapon accessory.

Set for official release in Europe during August 2020. Spawn comes with 22 points of articulation, perfect for posing on your shelf or for use in toy photography. Also included is a Mace weapon accessory which is awesome for reproducing many of Spawn’s bloody assaults!

This figure stands at 7 inches tall making Spawn perfectly suited to pose alongside the rest of the Mortal Kombat 11 figures. We can imagine seeing Spawn in a back alley fight against the likes of Terminator or even Robocop for an epic clash!

We think this figure is going to be on every toy collectors list this year and is surely going to delight anyone whoever decides to pick it up.

What do you think of this figure? Are you going to pick one up too? Have you played the Mortal Kombat 11 game? We would love to know your thoughts and receive your feedback!

Be sure to follow our store blog for all the latest toy updates. There are many more exciting figures are set to be announced later this year!