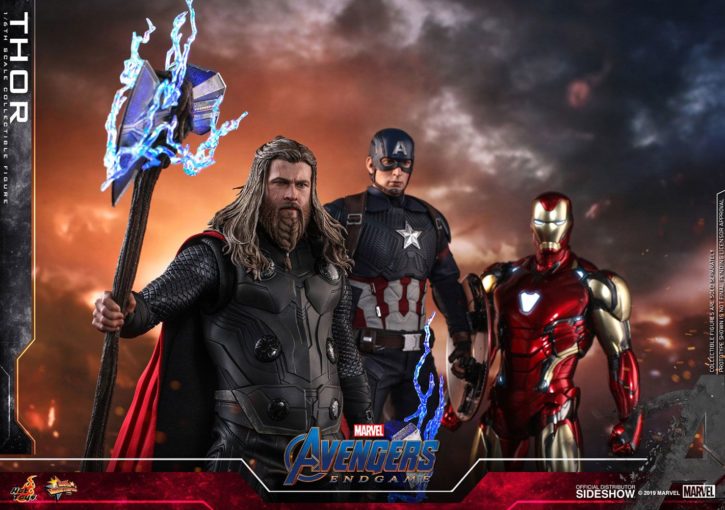 Hot Toys pre-orders for both Endgame Thor and Hulk are now live at Middle Realm.

Five years after the shocking events of Avengers: Infinity War, the God of Thunder’s priorities shift towards playing video games with his best pals while attempting to drink every bottle of beer in the city! His unexpected descent into depression has turned him into an alcoholic, thus giving him a massive physical transformation. His appearance has changed but his heroism remains. Thor is still and always be worthy to wield the mighty hammer, even if he might not necessarily always feel that he is.

Masterfully crafted based on the appearance of Chris Hemsworth’s appearance in the movie. He features a newly developed head sculpt with a pair of different coloured eyes and specially applied a luminous reflective effect that accentuates Thor using his thunder power. A newly developed specialized body that depicts his body with physical changes with expertly tailored body armour with LED light-up function and matching lightning effect accessories, a signature red-coloured cape, and body armour. The LED light-up Stormbreaker and Mjolnir are an accurate-scaled recreation of Thor’s signature weapons. This sixth scale collectible figure also features several pieces of lightning effect accessories and a dynamic figure stand with the movie logo.

WHAT’S IN THE BOX?

When the universe is in danger, Bruce Banner becomes the gamma-powered hero Hulk and smashes his way through the enemies of the Avengers. He continues to use his high-level intelligence and other high-tech tools to protect the universe from the latest intergalactic threat.

Masterfully crafted based on Hulk’s appearance in the movie, the highly-accurate figure comes with a newly developed head sculpt with impressive likeness, a detailed battle suit, LED light-up Nano Gauntlet with two interchangeable hands, an electronic device, a pair of glasses, and a specially designed figure stand with character backdrop.

WHAT’S IN THE BOX?